A thought about Freegans 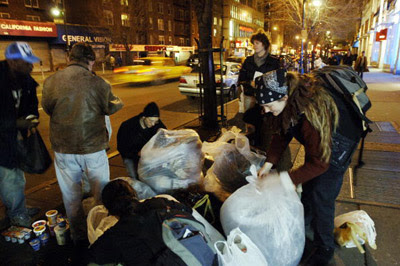 The topic on Oprah yesterday was "Freeganism." For those of you who don't know, Freegans are people who are anti-consumerism. Practically everything they live off of they find in dumpsters, mostly food thrown out from grocery stores. They go dumpster diving late at night and find all sorts of food that they take home eat. They are also vegan, hence the word "free"+ "vegan" = "freegan."
A few thoughts I had about this: I can definitely understand the need to consume less. They have some good points, like avoiding the seek of happiness in bought objects. I could work on that. And the fact that grocery stores are throwing away millions of dollars of perfectly good food away each year is definitely a waste.
Here is my big question: Aren't freegans still dependent on the commercialized and consumer-driven system? I mean if we weren't paying so dang much for groceries to cover the 2-3% loss caused by the stores having to throw so much food out, where would they get their food from?
This entire thing reminds me of "The Bee Movie" which we watched at the dollar theatre on Carson's birthday. A bee decides to sue the human race for stealing their honey and wins the lawsuit. But then after the bees stop making honey, all of the world's flowers die (with no pollenation) and the entire world suffers.
So sorry freegans, I will continue to buy my food from the grocery store. But maybe instead of me apologizing to you, you should be thanking me for contributing to the system that provides your free food. And if that's how you like it, from a dumpster, go for it!

Posted by Nate and Marcie at 6:34 AM 7 comments

Carson's turning 2 years old this Tuesday, and since my parents were in town we had a little party for him on Saturday. He loved it! Especially the new slide we gave him for his birthday present. The kids slid down that thing for about 2 hours straight! So, I think we'll get our money's worth by the end of this week :)
And we got the coolest Thomas the Train cake with a little train that actually goes around the track, it was a HIT! I decided that I didn't want to be sitting at the store waiting for balloons to be blown up so I ordered a fun bunch from Brenda Green, a lady in Nate's parents' ward who does balloons. They turned out great, she does a great job, and they're still a'floatin today.
Despite the lack of smilage in any of the pictures, Carson had a blast! 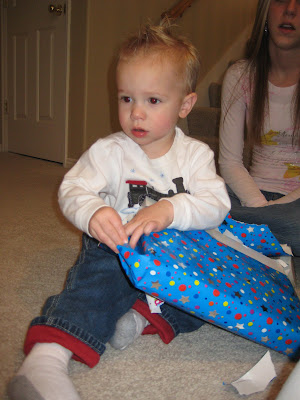 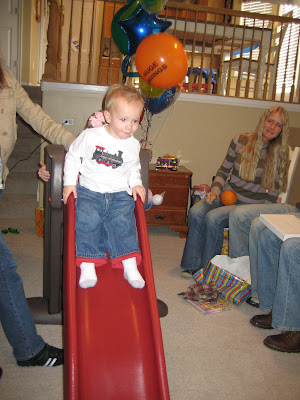 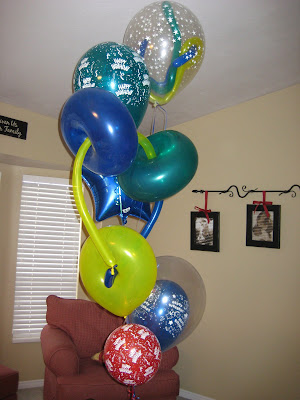 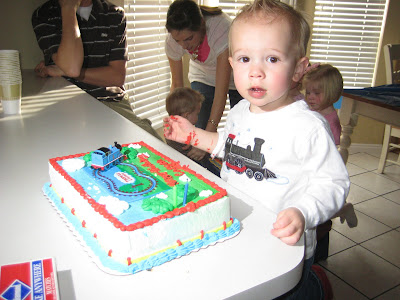 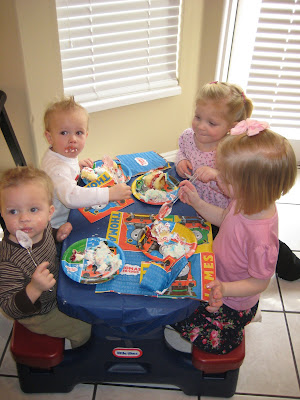 Posted by Nate and Marcie at 8:30 AM 7 comments

A visit to Sesame Street

My mom is in town this week, which has been a lot of fun. Last night we went and saw "27 Dresses", loved it! Today we took the kids to the children's museum where they have a new exhibit, Sesame Street and your body. It was so cute! My kids loved all of the things to do! And there were actually some pretty interesting things about your body, did you know you can create up to one cup of snot a day? 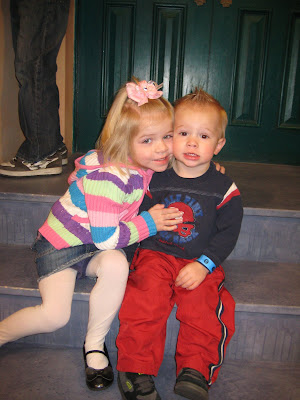 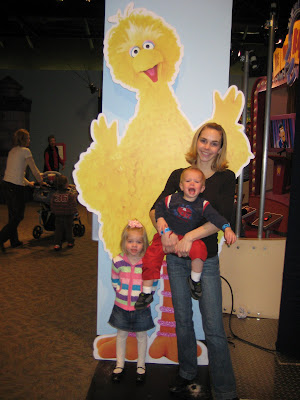 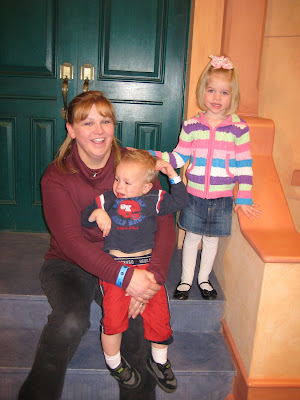 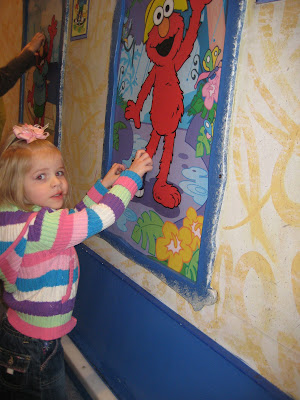 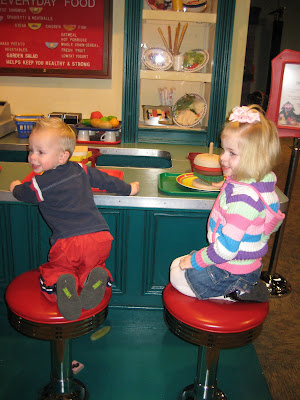 Posted by Nate and Marcie at 1:55 PM 5 comments

Aftermath of a stomach flu

Sadie came down with a stomach flu Tuesday night. We were up all night with her throwing up and diarrhea. I did laundry the next morning and couldn't believe how much there was from one long night! And it wasn't even close to being over. She was sick all day Wednesday, Thursday (I told her we'll celebrate Valentines Day next week) and is finally getting a little better today. She finally had ramen for lunch today after not eating since Tuesday night.
I was really worried about her last night, it is so hard seeing your little one so sick and not be able to do anything about it. I felt so helpless. After lots of prayers and pedialyte popsickles, I think she is on the mend. 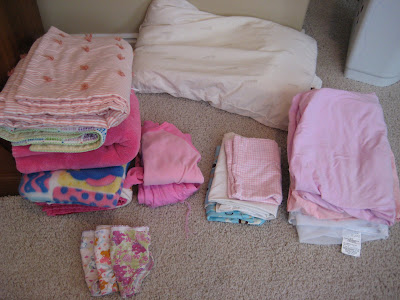 There is one cute story from all of this yuckyness. Her sweet preschool teacher, Miss Lori, brought over all of the valentines last night. I showed Sadie all of the valentines one by one while she layed in bed. Miss Lori gave her a Fun Dip with her valentine and Sadie lit up when she saw it. She asked to see it, then she said "when I get better, this is what I want to eat." Then she layed down and snuggled with it. She has carried it around with her since then, and slept with it last night. I thought that was the cutest thing ever. 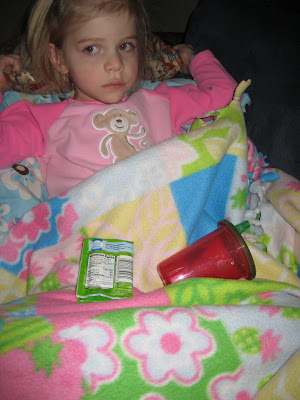 Posted by Nate and Marcie at 1:19 PM 5 comments 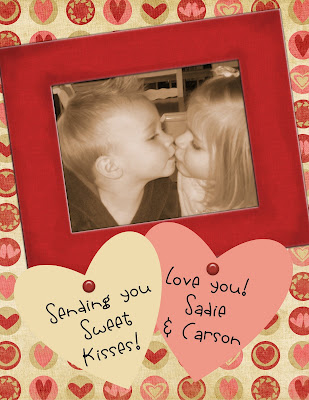 Posted by Nate and Marcie at 9:05 AM 9 comments

Last Saturday we went sledding with the Kirkhams and Nate's family. We had a blast! The best was towards the end we got a great train going on. I got some fun pictures of that. Nate tends to be a lot more "daring" when it comes to doing things with the kids. I tend to take on the protective-mother role. Like when he put the kids on their own sled, then went down with them by laying in the middle and holding onto the sides of the sleds. I have to admit, my kids have a lot more fun with Nate as a dad, and so far no major injuries to account for it! 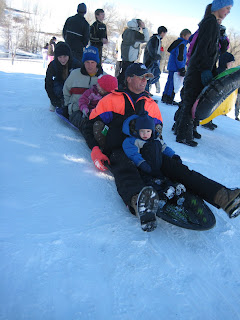 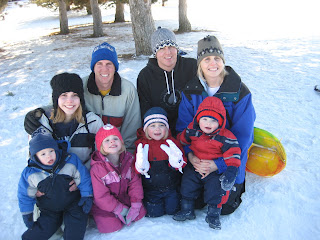 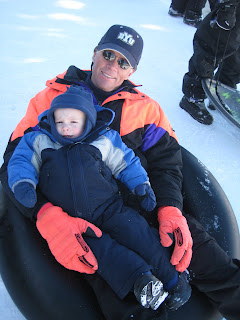 Carson with Grandpa Milne! "Again, again!!" he would say each time. 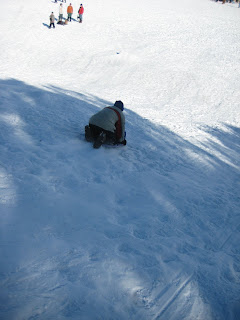 Nate & one of the kids, I think Sadie, going down the hill!

Posted by Nate and Marcie at 2:54 PM 4 comments

Note to self:
**No matter how tempting the sale is, don't ever take your 2-year-old to Old Navy again. There are balls there, and he cannot stand to sit in the cart when there are balls to be kicked, thrown, and chased around the entire store.

**Don't wash Sadie's favorite night gown the night Nate is at scout camp. She will throw a huge fit, you will be exhausted, and the combination will lead to a battle you will not have the energy to win.

**Buy a new cell phone battery A.S.A.P.!!! 20 minutes is just not long enough to talk to the outside world. (When my battery is finally charged, I can only make one phone call. Yesterday I had to choose between calling my friend or my mom. No woman should ever have to make that choice!)

Posted by Nate and Marcie at 9:57 AM 5 comments 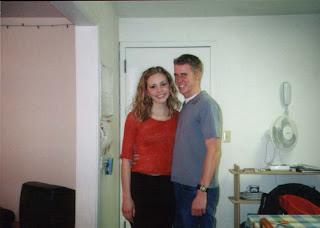 How long did you date?
We met in October, 2001. Nate came up to me on BYU campus and pulled the "do I know you from somewhere?" line. I think I was preoccupied with studying because even though I gave him my name and apartment number, I didn't remember him when he came to my apartment 2 weeks later. I asked "do you just randomly knock on girls apartments?" He was still brave enough to ask me out and we ended up seeing eachother every night after that. It was so easy, so natural. He was the nicest guy I had ever met, no drama at all. We got engaged March 15th, so we dated about 5 months, and then were engaged for another 3 months. 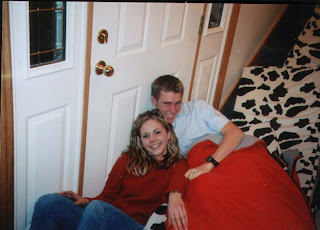 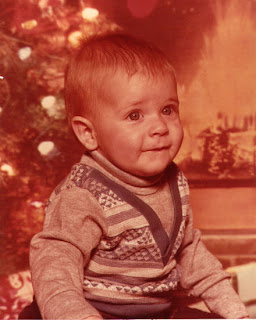 Who eats more?
Nate definitely eats more, like 3 times more than I do. It's not that I don't eat, I do. But he roofs all day and has an extremely fast metabolism. I don't think he could gain weight if he tried.

Who said "I love you" first?

I said it first, and then Nate said "I love you alot" (like from Dumb and Dumber). 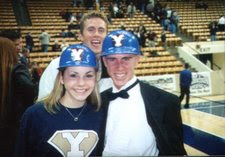 Definitely Nate, I can't sing. I can't read music either. I hate trying to sing unfamiliar songs in relief society because I have no idea what the next note is, yeah it probably sounds pretty sad.

We are always arguing about this. In reality we are pretty comparable, but I always beat him at scrabble and then try to convince him that it's because I'm the smarter one.

Who does the dishes?

Nate's pretty good about doing the dishes after I cook a meal. But, I do my share of dishes. Probably half and half.

Who sleeps on the right side of the bed?

I do, and no matter where we sleep (even in a tent) I still have to sleep on the right side. I think it's because when I'm pregnant I sleep on my left side and I hate facing someone while I'm sleeping, the breathing on eachother thing bugs me.

Who pays the bills?

Nate does, and he's great at it. I spend the money and he pays the bills. I think it's a good deal.

Who mows the lawn?

Nate does, I've never mowed a lawn in my life.

Who is more stubborn?

Me, definitely me, I'm a red personality for sure. Nate's blue.

Who kissed who first?

Nate kissed me, I think. It was a good kiss, though :)

Who asked who out?

Nate asked me out (refer to question 1)

Nate proposed on March 15th, 2002 at his parents house. He had 4 dozen pink roses and music on. He asked me to dance and then after the song proposed. I was actually really surprised because it was sooner than I thought he would propose. 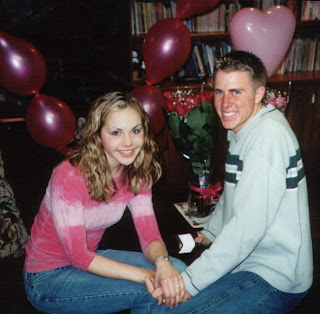 Who has more friends?

I think it's probably about the same, but I have more close friends than he does. I think that's a boy/girl difference.

Who has more siblings?

Nate wins, with 6 (almost 7 with a new brother being adopted this spring). I have 5 kids in my family, we both have big families. 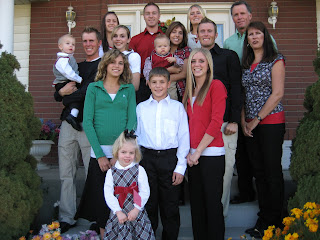 Who will I tag? Hmmm.... I think I would love to hear more about Natalie, Kirsten, and T.

Posted by Nate and Marcie at 1:05 PM 6 comments

"How could they do this to me", I wonder as I order another $5.00 clearance item from Gap.com. How could they give me free shipping on ANY order online with my Gap card? "I love them for doing this!" But, because of this wonderful, yet terrible new benefit, I have become addicted to the clearance section, and my kids' closets are completely stocked for next year's winter. That's good, I know, but sad too because I cannot justify buying anything else... and I love to shop! And there are still so many good deals that I have to at least look at, even if I can't buy them because my kids' closets are full. And then I start thinking, "wait, I have baby gifts to buy... "
I think the UPS guy hates me, seriously he gave me a mean look today. He's probably thinking, "this lady is addicted to online shopping (true) and yet why can't she buy all of these single items together all at once and save me the walk to her doorstep 3 times a week?" Well let me tell you, UPS guy, every day Gap.com's clearance section changes, which means every day there is a chance that they will have a killer deal on a cute shirt or pair of pants for my kids, or whoever the lucky new baby is that I was thinking about that day. And when I get free shipping for anything, even if it's $2.99, how can I not? Right?

Posted by Nate and Marcie at 5:15 PM 6 comments